The atmosphere was much, much more relaxed than last night as it was Egypt against Paul, poor Superman…. And it was sooo much more enjoyable as well on court, clear, fiesty of course but FAIR. JUST GOOD, EXCELLENT SQUASH. NO RUGBY IN SIGHT!

From the first rallies, it was obvious to me that Paul was not enjoying the flooring. At all. Like a David Palmer, he needs to push a lot on the ground, and he was suffering a lot from the fine layer of dust that comes from – wait for it – being in the sand desert.

Good reassessment from Paul in the second, a long 20m game, with him mixing the shots quite nicely, taking Ali to the front a lot or counterdropping with ease and success. From 3/3, 4/4, Paul dominates the game, 7/4, 10/6, 11/8. A few errors crept in Ali’s game.

In the third it’s Ali’s time to mix the pace and shots, not only being patient and pushing Paul to the back again and again, but also playing some short hard attacks that seemed to damage the New Zealander legs. Let’s not forget that Paul had played 242m against 215 for Ali and finished his semi well past midnight… Not much time to recover…. 2/0, 5/1, 9/2, 11/4 in 10m.

Very much to the crowd’s delight, Ali is now in the lead. And he was not to be denied, as the Wadi Degla star was able to take a good lead from 1/1, 2/2, 3/3, 4/4 to  7/4, Superman showing obvious signs of frustration with the floor and his inability to contain Ali. A good last push from the Kiwi and to be honest I thought we were on for a 5th when he levelled 7/7.

But there was a calm and a confidence in Ali’s squash tonight and it’s 4 points in a row for the WR1, 11/7 in 14m, with Paul slipping on his last shot and throwing his racquet, disheartened.

At that level of squash, it’s all mental. Whenever Ali is confident, he is unbeatable in my view. So in this tournament, my focus was on giving his confidence back after his loss in Qatar. And it was crucial for him.

Over the moon! Walla, Elhamdoulilah, I’m grateful to God. I’m so proud of him, he is back to his original squash, to HIS squash. And that’s it. I’m hopeful, I’m grateful. 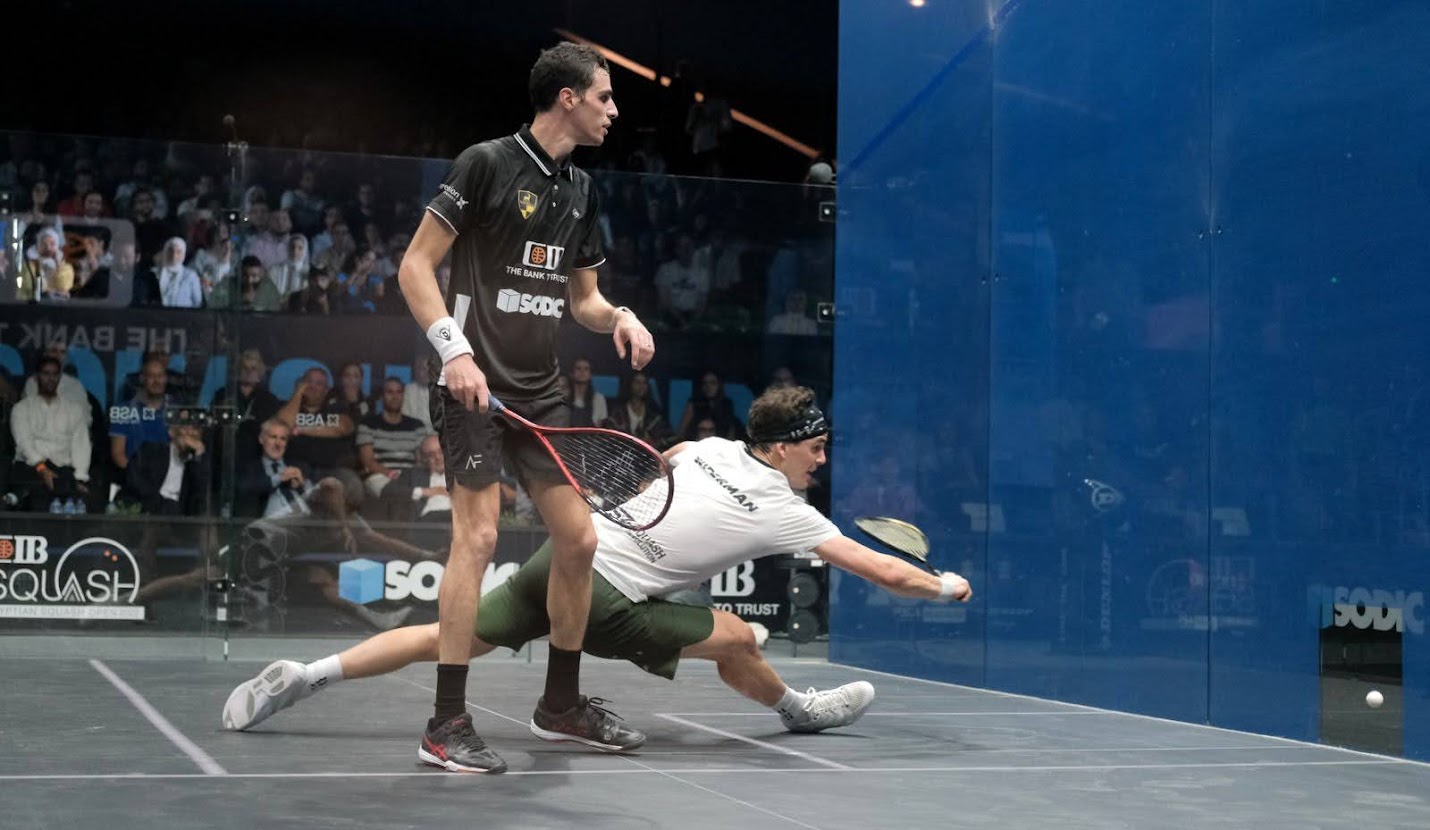 “He’s been World No.1 for so long. It takes a complete performance to beat someone of his calibre. Tonight, I don’t think I played well enough for a long enough period of time to get the win. I just don’t think I was consistent enough in my gameplan and accuracy and it let me down a bit.

“Credit to Ali, he’s very hard to beat here in Egypt and he turned up again and played a great final. “

“It’s still unbelievable every time I come and play in front of the Pyramids. You think you take it for granted, but then every time you come here there’s a loss of breath and you can’t really believe that you’ve watched all the greats of Egypt and globally who have played on such a stage. I only dreamed of being here.

“Obviously, I’m very happy myself and I’d like to thank Paul for such a great final. It’s always fun playing against Paul. Not necessarily in the lungs, but it’s fun to play him fair and square. I think I’ve had a pretty good past 12 months and I wasn’t able to beat Paul in any of them, which shows how good he is as a player. I’m glad that I got one today and I’m sure we’re going to have many great battles in the future and this season and I’m really looking forward to them.

“For myself, I’m really proud of this week because I wasn’t in a good place this past couple of weeks. Just one loss can take your confidence down and it’s thanks to the people behind me, especially my mum, my parents, the belief they have in me, day in and day out, makes me believe in myself every day.  To them, I’m forever grateful. My brother and Karim Darwish, who’s always on the court and the phone with me.

“I don’t want to forget anyone. My fitness trainers, Hossam Shaddad and Derek Ryan, they’ve done an incredible job to keep this slim body of mine intact, which is not an easy job, either! Seven Agency and the whole team for taking care of me off court. My family, my friends, my aunt who’s always behind me.

Lastly, my sponsors. CIB have been doing a great job the past I-don’t-know-how-many years now. They’ve been a great support for the sport, for myself and the players. Mr Hussein Abaza is more than a Godfather for all of us, and all of the CIB team. Everyone who’s here today.

“My new sponsor SODIC have been like a family to me ever since I joined them. Behind me every step of the way, Mr Magued Sherif and the whole team. I’m super grateful.  Of course, Wadi Degla, Etisalat Sports, Dunlop Squash, Expression and Open Squash for sure. “