Hesham takes out Gawad as the Quarter-Final lineups are settled

Egypt’s World No.14 Mazen Hesham overcame former World No.1 Karim Abdel Gawad in five games to secure his place in the quarter finals of the CIB Egyptian Open, which will take place on the glass court in front of the iconic Great Pyramid of Giza.

Hesham, who played his round three match on the traditional courts at the New Giza Sporting Club, got the better of No.6 seed Gawad in their last meeting at this event in 2020 and the talented shot maker ensured he did it again with a resilient showing against the 2019 champion.

Despite Gawad taking the first game 11-8, Hesham rallied well to take the next two 11-5 and 11-9. Gawad improved to take the fourth game, but ultimately it was Hesham who was able to hold out in the fifth to secure the victory.

“Playing Karim is very difficult because you never know what to expect, kind of the same as me,” said Hesham afterwards. “If he is moving well, he’s going to be dangerous. If he is a bit slow, he can still play some tricky shots.

“I think I blew it in the fourth, he was handing it to me then I just gave it back to him, but I’m really glad with the way I fought back in the fifth. I started shaking a little bit, I wanted to end it too quick, you have to be on your toes the whole time.”

Hesham will face World No.1 Ali Farag in the quarter finals after he overcame compatriot Mohamed ElSherbini in front of the Pyramids on the glass court, with the latter forced to retire in the third game.

Defending champion Farag was comfortably in control as he took a 2-0 lead for the loss of just six points, before ElSherbini limped off court at 2-0 down in the third, with the World No.31 eventually shaking hands with Farag to bring a premature end to the last match of the day.

“It was a shame it had to end that way, I hope it’s nothing serious because we have a lot of tournaments coming up,” said Farag.

“I keep approaching every tournament the same way, whether I won it or lost in the first round. I come here and try to win it, but there are a lot of big players in the draw and it’s going to get tougher and tougher every round.”

The other quarter final in the bottom half of the men’s draw will see New Zealand’s Paul Coll face Egypt’s Marwan ElShorbagy after they claimed  wins over Egypt’s Mohamed Abouelghar and India’s Ramit Tandon.

Coll was forced to do things the hard way as he went the distance in an 87-minute battle with World No.16 Abouelghar as the Egyptian twice came from behind to claw his way back into the match. However, the fifth proved to be a step too far as the Kiwi was able to take control and never looked back to close out an 11-9, 9-11, 11-7, 5-11, 11-5 victory.

“He’s probably the toughest round three opponent you could get,” said Coll afterwards. “I knew before we even started that it was going to be a battle and it lived up to that today. I’m very happy to come through, it was a bit of an up and down match, but I’m happy to find my range on this court and get a good amount of time on there.”

ElShorbagy, meanwhile, produced a strong showing against World No.54 Tandon on the traditional courts to claim an 11-6, 11-9, 11-8 victory and secure his place in the last eight at the PSA Platinum event.

In the women’s draw, USA’s World No.6 Amanda Sobhy was forced to come from two games down against compatriot Olivia Clyne in a thrilling battle at the New Giza Sporting Club earlier in the day.

Clyne, who suffered a 3-0 defeat to Sobhy just three weeks ago at the British Open, showed she had put that behind her as she executed a strong game plan to go 2-0 up. However, Sobhy rallied back well to draw back level in quick-fire fashion before a controversial stroke decision saw her claim an 11-8 win in the fifth.

“She played so well, it’s the best I’ve seen her play against me,” said Sobhy. “You could tell she was so up for it. She took our match from the British and built on that and she was tactically brilliant.

“I got a bit lucky on that last call, that was one of those where you just don’t look anywhere and you are like ‘Oh, I’m going to take it, sorry.’ I’m happy I got through, it wasn’t my finest performance, but I’m just glad I just pushed and now I get to go to the Pyramids.”

She faces World No.9 Salma Hany for a place in the semi-finals after she overcame younger compatriot Jana Shiha in straight-games.

The other quarter final in the bottom half of the women’s draw will see a thrilling battle between World No.2 Nouran Gohar and World No.5 Hania El Hammamy following wins over Nada Abbas and Nele Gilis.

Gohar, who finished runner-up at this event to Nour El Sherbini last year, cut a determined figure as she found her accuracy quickly to down World No.27 Abbas, 11-3, 11-2, 11-5.

Meanwhile, El Hammamy had to come from a game down against Belgium’s Gilis to secure her last eight spot.

“It took both of us a while to adapt to the court conditions,” said El Hammamy. I think the first game it took a little bit of time to get into the game and the last three games, I managed to find my length and corners.” 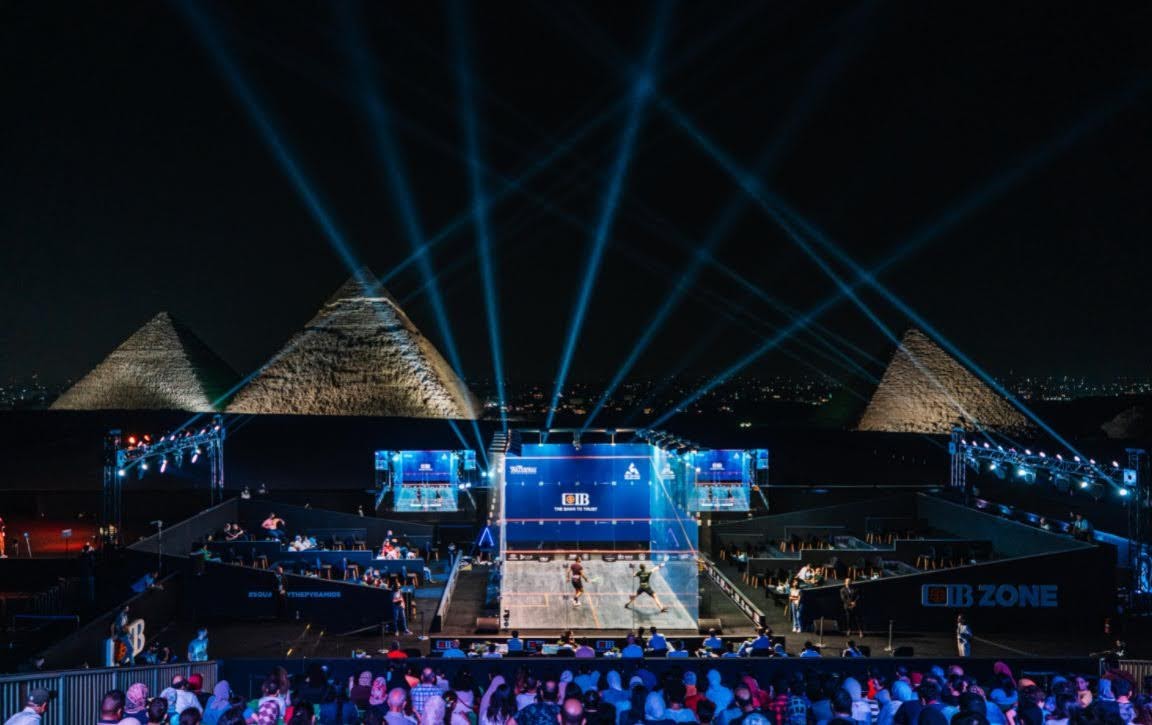