Incredibly busy Rodney Martin these days… And I love his way to live the match with the players, trying very much to keep calm, but feeling his players emotions for sure. And every single player I speak to has only good things to say about him. Nice to have the coaches back, I tell you.

It was not an easy match for Marwan. Just back from Saturday’s final in Nantes, like Tinne, Nele and Victor. And he knows how dangerous YowNg can be as he trained with him a lot  in Bristol.

Of course, you have to admire how Marwan can shut out his opponent when he plays a drop shot, both side. Not sure how he does it but he manages to get his opponent locked behind him, frustrated as left, with a no let every single time.

First two games were pretty long, 18m, 14m, with Marwan letting the third go – bit of tiredness I recon, but back on top in the fourth, lethal at the front, while YowNg never put a foot wrong. One to keep watching that boy…

What does Rodney brings to my game? It’s more about reminding me. I lost my length a bit in the last season, and you always talk to me about me controlling the game. And I lost that. My strength became my weakness. Now, everyone hits amazing length….

I stopped enjoying the game actually last season, my game was not accurate enough, I wasn’t sharp in my mind, and I lost motivation in the season. But then, I’m so grateful to Rodney because he brought back enjoyment back in my game.

Our sessions are so intense, but at the same time, we always have a smile on our face because we are really enjoying it. I’m so grateful for that. I’m enjoying the hard sessions again….

It’s not like I gave up last season, I was still showing up to the training, but a part of me didn’t want to be there and I was just going through the motions.

Rodney, it’s all about getting to the ball in the right position, getting sharp on the ball, keeping going… he understand the game so well. I’m really really REALLY enjoying working with him.

I’m still not getting the results I want but I know I just need to be patient, and as you told me in Nantes, winning is a habit… and I want to be back in that habit…. I’m famous for having a good lead, and screw it up. It happened in Qatar and Nantes, with Declan, Saurav, Victor… It’s about closing the matches out.

I’m enjoying being here, I’m loving it again, I’m so grateful I’m working with him. Everyone is scared of him, but he is such a nice man….

“To be honest, all that matters right now is just getting the win because it’s been a long few weeks and if I can just get one more win each day, that’s all that matters. In my game, there’s some stuff that’s working very well because I’m on a good run, but there’ll be things that won’t go well because of fatigue or nervousness.

“I’m just happy to be through against a very tough opponent. It’s tough against him every time and I knew it would tough yet again and that I had to be really focused and motivated and determined to give my all.” 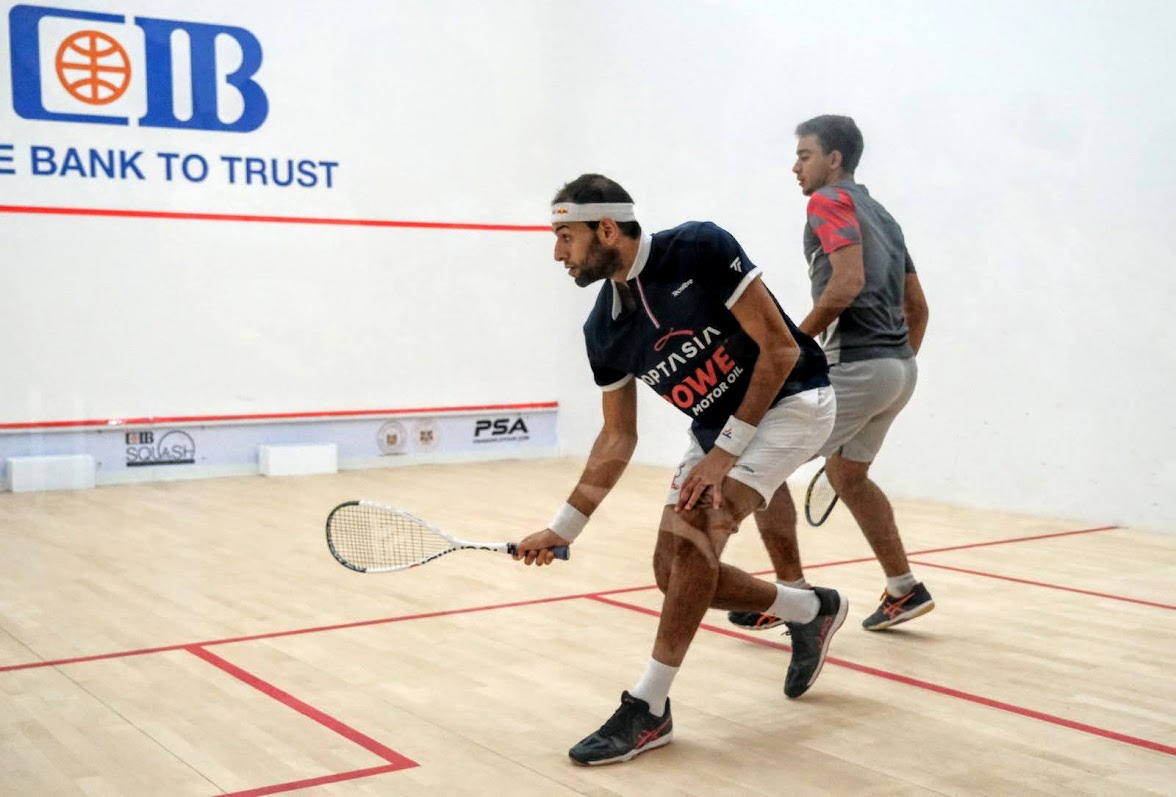 England Mohamed ElShorbagy continued his hot streak of form by dispatching Egyptian Yahya Elnawasany in straight sets in 22 minutes. Mohamed, who was crowned the Qatar Classic champion recently, put Elnawasany to the sword with a clinical display – winning 11-2, 11-4 and 11-6.

“Most players who are from Egypt are either come out of Alexandria or Cairo, but Elnawasany from a very small city in Egypt called Tanta. To come out of this city and be competing on the PSA World Tour and doing so well in Juniors, what he did was unbelievable. What he’s doing is actually a joke, believe me! There aren’t many courts there, the ones that are there aren’t great quality, but it’s a credit to him and his parents.

“I won my first tournament of the season in Qatar, the first Platinum event of the season, which was a great start to the season but it’s a very long season so you want to keep going. I have my team here with me and we’re serious about this event. I’m looking forward to my next event and I hope I can do well in this one too.”