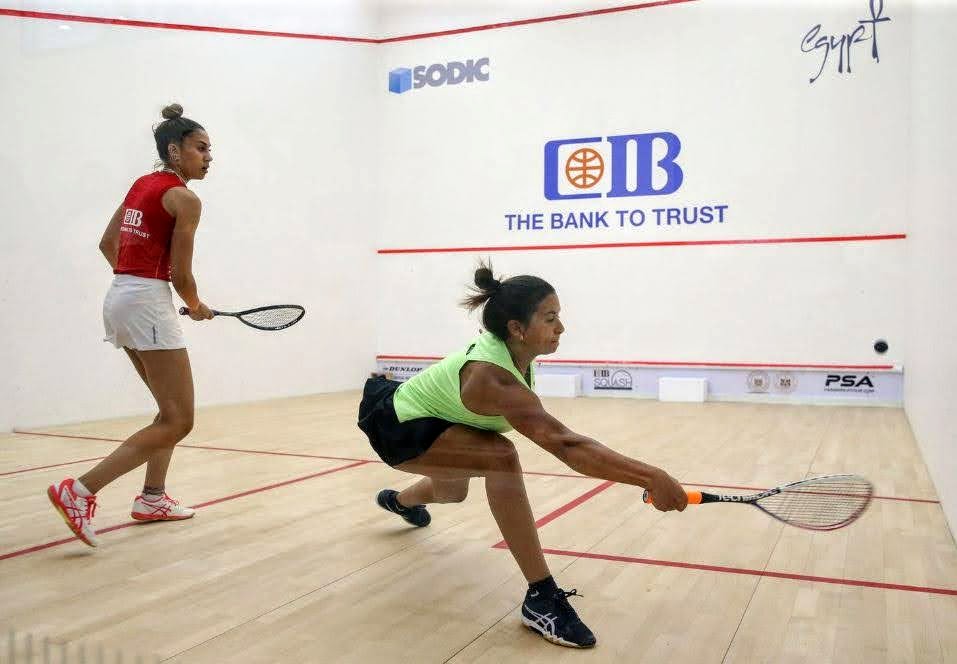 Zeina was such a BOMB today. She was running after every shot, retrieving some crispy attacks(winners?) from Jana, and just killed her opponent mentally I felt. As Jana confessed at the end, “I am happy with my coach. It’s in my head. I could be a good player I think if my head was just in the right place. I’m all over the place…..”

After losing the first game quite comprehensively, the Alexandria girl was ahead the whole second, even getting ball games, but Zeina just didn’t let her take that one without a huge fight. Jana eventually takes the game 14/12 but after that, the games were pretty onesided 6m and 4m, 11/5, 11/3.

The last season was so harsh for me, so many bad losses, a lot of stuff going on. This time I thought I didn’t want to repeat the same pattern and to be honest, it could hardly be much worse so, not much to lose really!

I’m training with Vito Shoayeb who has been supporting me for a long time,  and Andrew Matta, they are really helping me a lot. I needed a win, to keep the momentum going, to gain confidence again, especially as that game is essentially about confident.

Happy to be through, and looking forward to play SJ tomorrow. 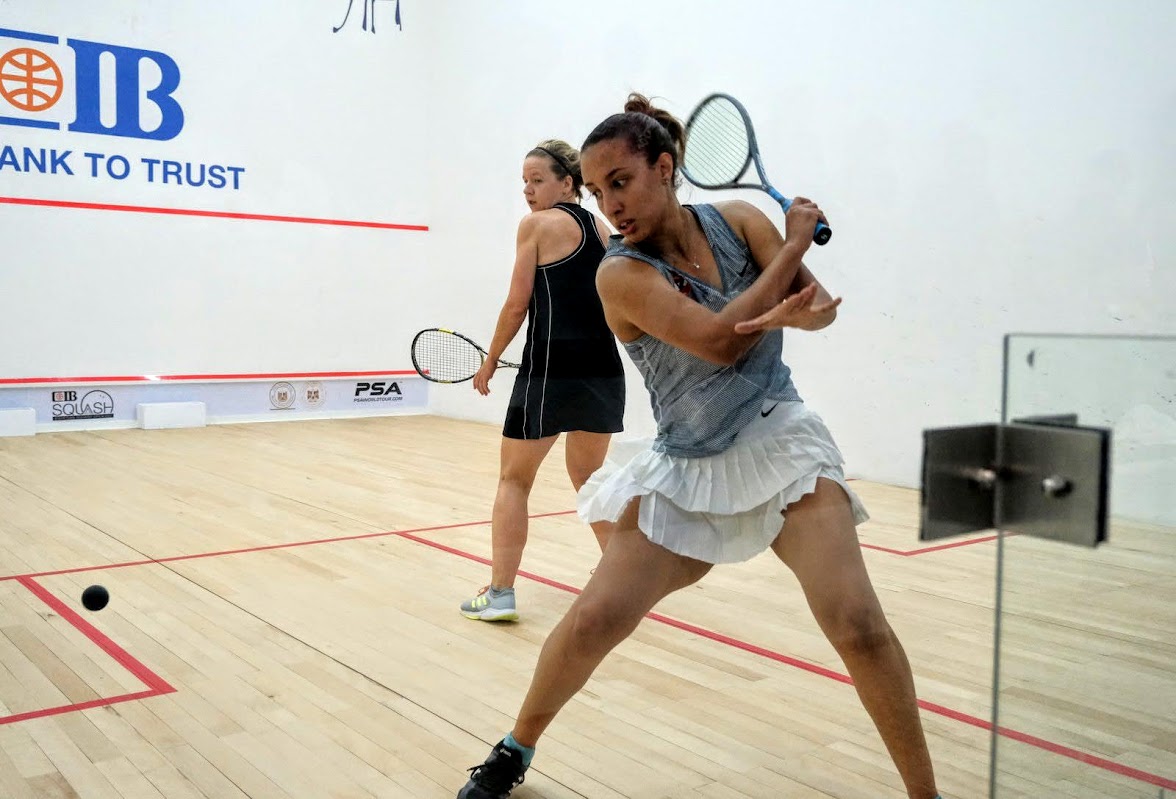 Sana Ibrahim progressed through to the second round after being given an almighty scare by England’s Julianne Courtice.

After taking the first game 11-8 and the second 14-12, Ibrahim looked certain to set up a second round clash with the USA’s Olivia Fiechter when she went 10-5 up in game three. Courtice, however, stunned Ibrahim and the home crowd by saving every match ball to force a tie break. More match ball opportunities came the Egyptian’s way, but she was unable to convert, and Courtice found a foothold in the match with a 16-14 win.

Ibrahim, though, did not allow the shocking reversal to dispirit her, and came back well in the fourth game to win the match with an 11-9 victory.

“I feel so relieved. 2-0 up and with five match balls only to lose it made me feel like I was going on to lose. I’m so happy I was able to win because I was really tired and my legs had stopped, thank God that I won!

“I think Iost those match balls in game three because I was thinking I was going to win, I was 10-5 up and just needed one last point to win the match and I thought too much. I told myself ‘I’m 2-1 down, not 2-1 up’ to motivate myself.’” 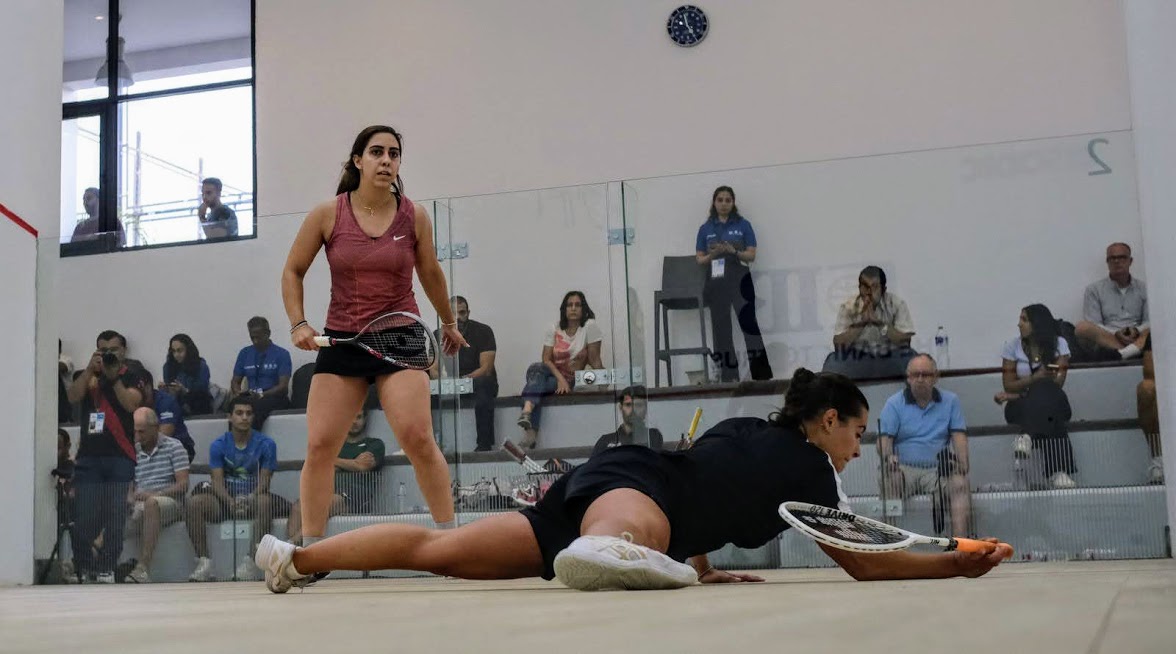 World No.23 Nadine Shahin dispatched Cristina Gomez in straight sets to book a spot in round two. Shahin had the match sewn up in 25 minutes, claiming 11-6, 11-9 and 11-7 victories over the Spaniard. The Egyptian has teed up a second round clash with World No.4 Amanda Sobhy tomorrow.

“I think me and Cristina haven’t played once on the PSA World Tour, we’ve only played in junior tournaments. I remember in finals it was always a tough five setter when we were younger. I know what she had since she was young so I knew it was going to be tough either way, and I’m just glad I did it in three because she was always leading in the points.

“I love the fast pace! She tried to break my pace but I’m happy that I was able to focus on my game. It’s been a while since I played Amanda and I know the pressure is on her now she’s number four in the world so I’ll just do my best and hopefully I’m hungry enough to win.”