When you win two matches in two days in the tie break of the 5th, you are bound to feel it on the third day. Abud did his best today but against someone like Mazen, you need your 100% physical, but today, the Qatari was running on fuel I felt….

I think he started to play better in the third game, he looked a bit sleepy, maybe the two hard matches he played the two previous days, I thought he was not himself in the first two he can play much better than that.

I was trying to make sure he wouldn’t wake up, to keep containing him and take the time away from him. But in the third, maybe I became a bit too lazy, or I slept a little bit on my game as well, he started attacking and getting into it. That’s why he win the third. And the fourth was really hard to win.

I’m trying to feel confident with my body, but I don’t think I ever will be really. It let me down so many times, so I was praying that it wouldn’t today. I feel I’m far from where I want to be yet, I try and be injury free as I had a bad injury. That’s my main goal at the moment, be injury free.

I would like to say that yes, I’m enjoying it. But I can only say sometimes. The amount of injuries I had in my life made me at some point giving it all up. I feel I have so much potential I couldn’t reach. But I think I’m more strong mentally, if not strong physically, because I never had the time to train properly, as I’m all the time injured.

My parents are my biggest supporters, since Day One. Any time they have the chance to come in Egypt as they live outside Cairo, they come and support me. I wouldn’t be anywhere without them, more in life than on court actually… I’m so grateful for them.

No.4 seed Diego Elias is through to the last eight following a comprehensive victory over England’s Declan James. The Peruvian Puma, who last reached this stage of the tournament two years ago, raced into a 2-0 lead when he took the first two games 11-6 and 11-4.

Elias looked on course for another comfortable victory in the third, but James battled back to save five match balls as he almost forced a tie breaker. However Elias prevailed to reach the quarter-finals where he will meet either French No.1 Victor Crouin or Marwan ElShorbabgy.

“I’m very happy with the win, the way I played and I’m happy to win in three which saves a lot of energy for my next match on Friday so I’m feeling good for that. He’s always tough. I think he’s been playing in a lot of tournaments recently, but I knew I had to start strong and that worked very well for me.

“I’m looking forward to the quarter-finals now. I play the winner of Marwan (ElShorbagy) and Victor (Crouin) – that should be a good match and I’m ready for that.”

Tarek Momen is through after pushing on to win 3-0 following a brutal first game with Gregoire Marche. The first game, which lasted for 29 minutes, felt crucial in deciding the ultimate winner, and started with Tarek twisting his ankle on the first point! He got a few minutes injury time and as it happened against Victor in Qatar, he was a bit worried about his movement for the next few points. 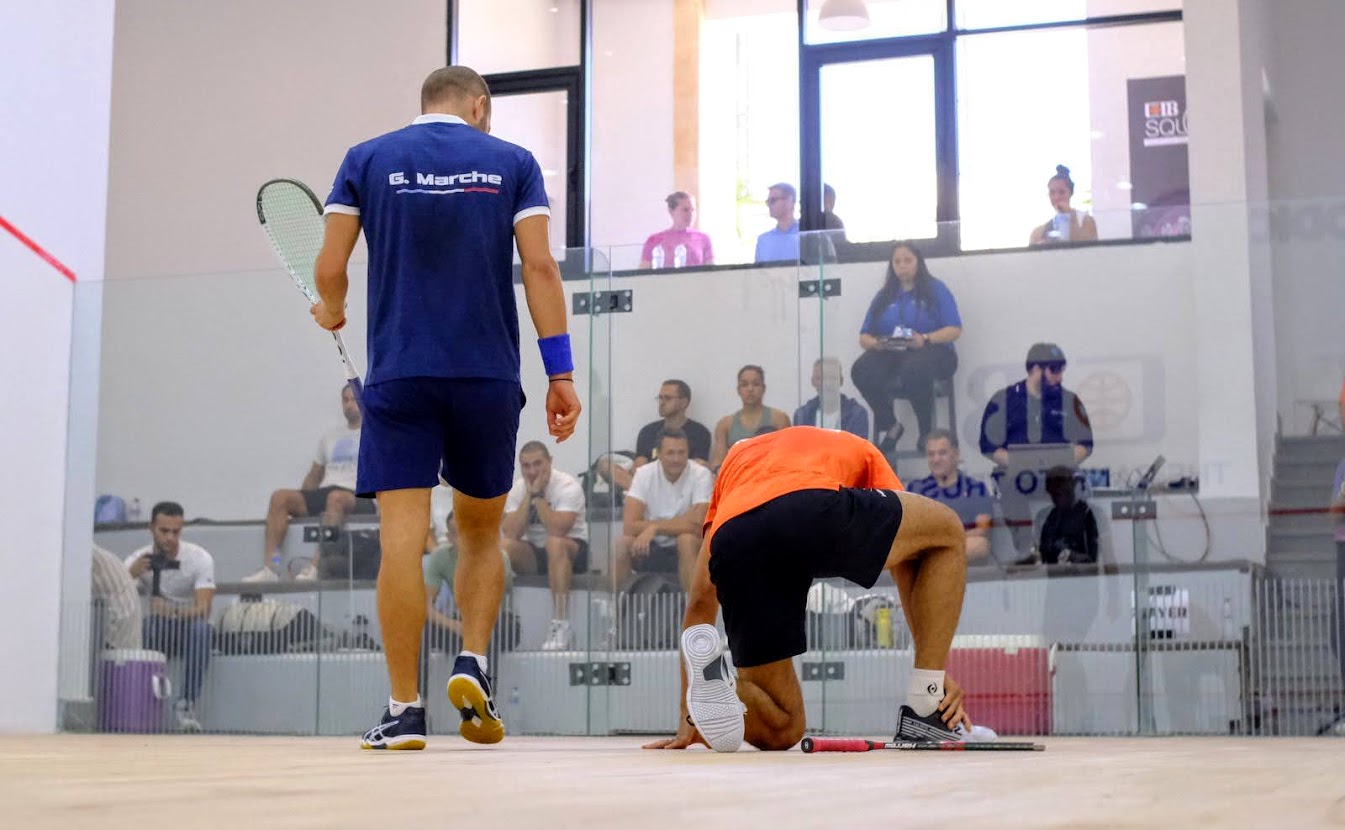 After this, it was more comfortable for the No.6 seed, with Momen winning the second game 11-5 before edging the third 12-10.

“I feel good. I came through a couple of tough rounds so I’ve got to be please with that. Greg today definitely didn’t make it easy for me. The first and third games could have gone either way and I’m just happy that I managed to push through at the crucial moments and sneak those two games. I’m very happy it didn’t go on longer than that and I’m looking forward to regrouping and hopefully playing better again tomorrow.”