Camille Serme wins the first match at the Pyramids, coming from a game down to beat Lisa Aitken …

According to her coach Philippe Signoret for once in the VIP crowd and not biting his nails in front of SquashTV, Camille is suffering from a tendinitis in her leg since Chicago, and she hasn’t played or trained as much as she would like, and lacking match fitness terribly.

Well against her, Lisa was on fire. Planted at the front, dispatching killer close to the tin as sweets for Halloween, the Scottish Marvel was outplaying Camille and led the whole game 3/0, 5/1, 6/2, 8/4 until Camille managed to level at 9/9. But the confidence was in the Scot’s raquet and she closed the game 11/9 in 15m.

And to be frank, when Camille found herself 5/1 down in the second, I heard her plane leaving from Terminal 2 in Cairo Airport at 1.55 am. But little by little, the French lady seemed to turn the table, found a length that finally got to the backwall and not in the middle of the court.

6/6 was the turning point, she managed to make her opponent doubt a bit, got a couple of errors out of her racquet, and levelled 11/7 in 13m.

From that point on, the French was systematically in front of Lisa, and managed to take the sting out of her shots, taking the two following games 5 and 1, in 11 and 9m. But that was a close call I can tell you. Lisa was not happy with herself for letting go and I understand why she was frustrated.

Lisa : At 1/0 and 6/3 up, I got a bit stage fright. I thought oh woah, this is more possible than I thought. And I could feel that the squash I was playing was causing her damage.

And then, literally, from that moment, I took a step back, and I stopped being so early on the ball, aggressive and purposeful with my shots and then I just let her come to life. So, quite frustrated.

But that’s a lesson learnt I guess. 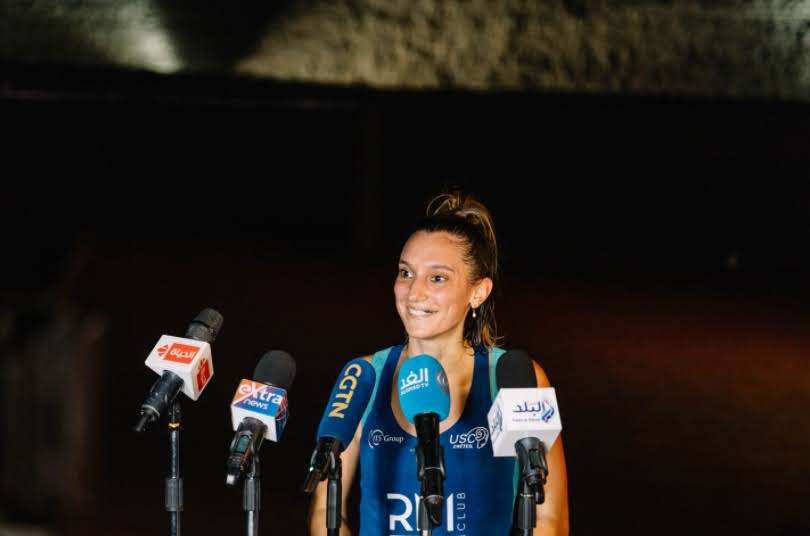 Camille :  To be honest with injury, I haven’t been able to train properly.

She was more precise than me and every time I would do a bad shot, she would punish me and that’s what I focused on after. It was either play more straight and more tight or when I cross, put it wider – that was the main thing I thought about.

It was ToC that I won in 2020 when Rowan and I last played so it’s been a while.

A superb first game from the Canadian who was able to put so much pressure on the Princess tonight, and got a great chance to close it at 10/8. But incredibly, she then was forced to make 4 errors courtesy of Nour’s sudden change of gear, the Egyptian clinching the first game, 12/10.

Danielle needed that first game to believe in her chances…

Danielle : At 10/8 in the first game, it’s a mixt. She kept applying the pressure until I guess I felt I had to option. And there are a couple of shots where I just forced it instead of being more patient, definitely getting overexcited, instead of following my initial game plan which was staying calm as much as possible, but obviously it’s hard not to get ahead of yourself. She didn’t want to drop a game either, and she is experienced enough not to let me …

Last year, when I was playing her, I had absolutely no clue where the ball was going the whole match. I was frantic, I had no idea. And part of it was because I was so excited and nervous, I was not even watching.

But I improved my movement a lot, so even if I wasn’t able to recover, regroup and keep building the rallies a little bit more, again, she is putting so much pressure, your legs become heavier as the match goes along, because every shot is quality…

Nour : It’s a tournament that every player dreams to play on this court and it’s one of the iconic venues, it’s really great to come back and play again here. I have a lot of great memories here and I’m glad to be here again.

It’s more difficult to prepare because you’re alone because of the bubble. I try to just focus on the squash and have a good game plan. Be relaxed, it’s always nerve wrecking playing in front of the crowd and in front of the Pyramids, it’s really hard but I’m pleased to be through.

Danielle is a really good player, the court is very bouncy and physically, she is very good. First game was very tight and I’m glad I got it at the end, I think that made a huge difference in the match being 1-0 up and losing the first game. I’m really glad I went through.

Hopefully my matches will be good, I’m in the quarter finals of another Platinum event and fingers crossed I’m going to do well and keep the momentum going.