THAT MOMENT YOU WANT TO SLEEP BUT….

OK, maybe I didn’t exactly start the event with the best of energy.

Having finished the Nantes French Open on Saturday night, or actually Sunday at 3.45am, taken a train to Paris at 11.05 and a plane to Cairo arriving at midnight, plus the normal get me a good room that took about 2 hours at the Hyatt Regency New Giza, it was around 4am when I finally settled in a very comfortable bed I must say. The wait was definitely worth it.

With first matches at 11.30 that same morning.

To be fair, it was lovely being back in S Club, the Sponsor Sodic Sports Club we used during the Worlds a few months ago. It’s a lovely club, truly, even if having three courts running for 8 sessions per day, plus matches at night on the El Gouna Court set in a superb setting at the club itself is not the easiest of schedule!

But please, next time, could we have a room Boss; instead of a noisy corridor, please pretty please…

Still, the wonderful Ahmed Nazih, in charge of, well, everything this side of the court. I had to take pics of him myself because one of the reasons I love him  so is that he is hardly in any pictures, as he is always doing something for us, including transport, hotel, etc.

Nazih had dedicated to SquashSite a lovely young lady, Jana, from the OCD Group. That lovely young lady was there to manage all the worries/requests we had, and she did that beautifully. Clever, efficient, her and her team were a joy to work with. I strongly recommend OCD for squash events and more!

Because we knew where we were, who to ask, and thanks to PSA structure, Tim Garner, Lee Beachill, with the help of the one and only Engy Mamdouh, the matches went smoothly. On top of that, contrarily to the COVID period where I was on my own covering the 3 courts, they were three of us, Jonathan and Simon from PSA, plus me, so one court each, that was so much more manageable, thank the Lord!

Especially as from the second day, I settled actually at the back of “my” court, and was able to maybe not see all the matches but as least, hear them while working on the laptop.

That Moment of LondonCabs Magic 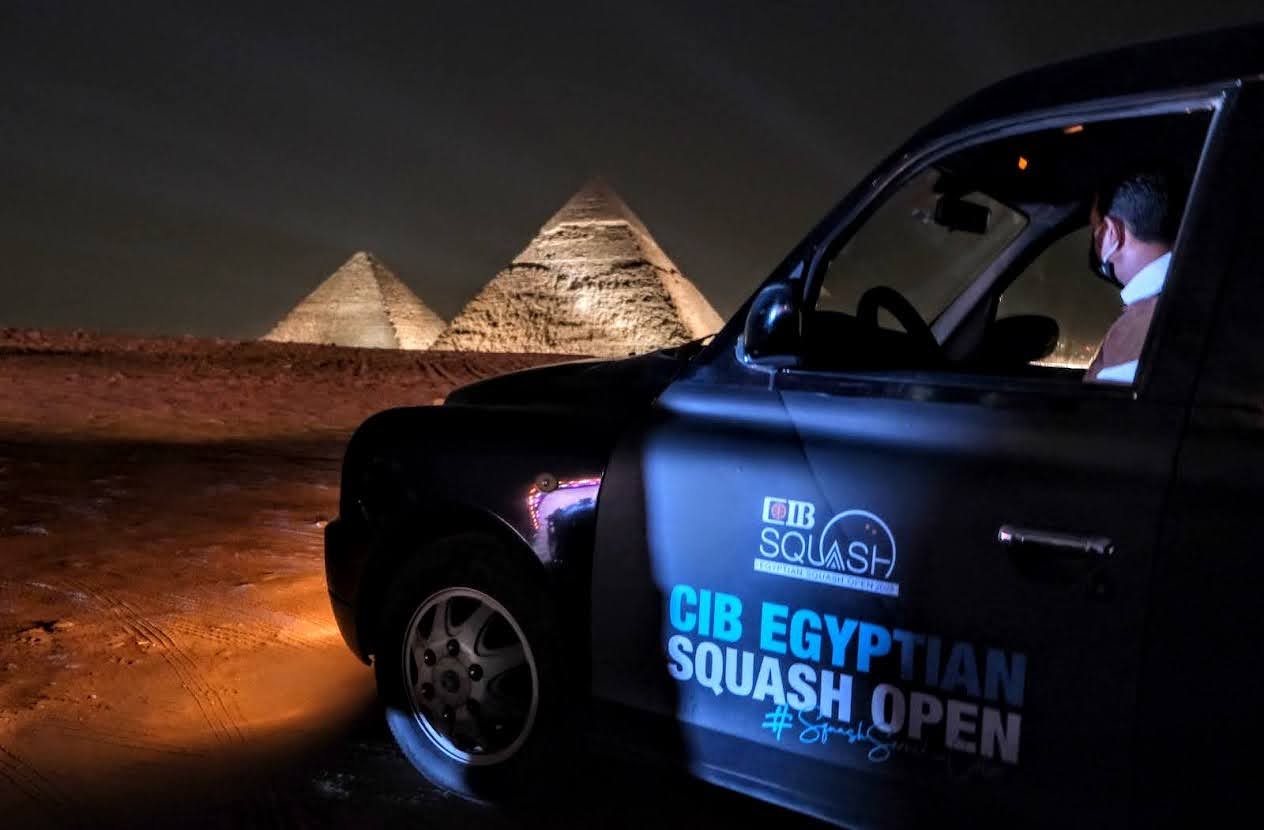 Why are they called London Cabs you may ask?

Well, because they are just that, the BlackCabs that you see in the Streets of London. Sixt was sponsoring the event, and they will probably never know that the whole idea of me bringing my heavily disabled brother to Cairo last year was born after the first time they sponsored the CIB Egyptian Open.

Seeing them made me realise that I could bring my brother to Egypt as transporting him – which is one of the main problems I’m facing in France – would be easily solved thanks to the ramp/space that every single LondonCab possesses.

So, thanks to their sponsorship of squash, I used them for my brother, and I have to confess, for myself as well, as their booking system allows you to book them for 2, 4, 6, 8h and more.

That moment where passion overflows

That moment coaches are back doing their jobs…

At that level of squash, it’s all mental. Whenever Ali is confident, he is unbeatable in my view. So in this tournament, my focus was on giving his confidence back after his loss in Qatar. And it was crucial for him.

“It has not been easy to face Nouran, as I was her coach for so long but it’s our job, this is our career.  Now, I’m happy with what I’m doing, I’m trying to do my best, getting the best out of my players.

I want to congratulate Nouran for reaching this level, she is playing amazing. Today they had a good plan but so did we. But as I told you yesterday, it was all who was going to adapt to the situations. You can see the different scenarios, and if you can see the different scenarios, you are going to be closer. And sometimes, when the scenario in your head doesn’t go your way, you can simply break down.

And that’s what we are working on, adapting to the conditions, the court, the referees, the interferences, even accidental. And it was not in the plan. So yes of course it’s about squash and improving the tactical stuff, but it’s also about changing your way of thinking. How to smile during the rallies, how to be happy when you are playing, how not to feel the pressure, relieve that pressure, and I think Hania is implementing this greatly.”

That moment the IOC turns up…

OK, it was only for four points during the Fares/Paul match, but COME ON! Well done Egypt Minister of Youth and Sports Dr Ashraf Sobhy for that “Tour de Force”

That moment Amina Orfi nearly made it Round Two

Remember the name people. Amina is one of the precious gems coming out the Egypt Factory and had a match ball against Sabrina Sobhy in round one. I just wish she would call her tins and double bounces. She doesn’t need that, the talent she has is ENORMOUS.

That moment you have to thank your mum

Ali thanked his mum Mona for finding the words that gave him his confidence back in his game, confidence he lost in his previous event, Qatar, losing to Miguel Rodriguez.

Lots of photographers, including our own Steve Cubbins – you can’t see him, he is taking the pic – Steve Line back after a long “holiday, thanks COVID restrictions”, and the EDGE photographers, working alongside us for the event. Lots of them…

And plenty of lovely music to entertain you… not BLASTING. Real good music, good singers. Thank the Lord.

And finally, that moment we HAVE to thank our Guardian Angels

“Please call me Magued” said our Guardian Angel number One, Magued Sherif, Sodic CEO, “new” sponsor on the Tour, he supported the Worlds back in May, and also sponsors the two event winners, Ali and Hania. That was a good evening for SODIC…

And at last but certainly not least, our Guardian Angel in Chief, the Godfather, CIB CEO Hussein Abaza.

Without him, the PSA Tour would have stopped during COVID, we all know it. And much less important on the big scales of things, so would have SquashSite.

He is my role model, he understands my sense of humour and doesn’t mind my bad temper. That tells you how great he is.

Oh, not to mention our Promoter, the one and only Amr Mansi. Without his dreams, we wouldn’t be there, now, would we….

Merci to you all. And see you next year Insh’Allah.

Quotes from the Big Boys!